Bob On The Web

The red-bricked Victorian home where Beatles star John Lennon spent the first five years of his life was auctioned for 480,000 pounds ($770,250) this evening. 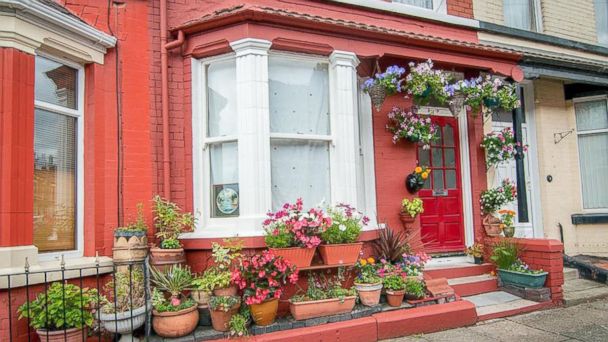 The three-bedroom, mid-terraced home at 9 Newcastle Road in Wavertree, Liverpool, is located just a few minutes away from Penny Lane — the title of one of the Beatles’ most iconic tracks. The BBC reported that an American who wished to remain anonymous bought the home after a bidding war.

“It has got a lot of history from when he was a youngster,” Andrew Brown, tonight’s auctioneer told ABC News.

“I have made sure original features have been preserved so that they reflect the 1960s period when the Beatles wowed the world with their rock and roll music,” the owner said in a statement. “The main structure of the house and the features, such as the original Victorian sliding sash windows, are as they were when John Lennon lived here...

The magical mystery surrounding a group of teenagers photographed by Ringo Starr in 1964 has been solved.


Last week, with the help of USA Today, the former Beatles drummer began a nationwide search for the six teenagers in a photograph Starr snapped during the band's first visit to the United States in 1964. "They’re looking at us, and I’m photographing them," Starr wrote of the encounter in "Photograph," a book of photos from around the world taken by Starr throughout his career. ("Photograph" is due out Nov. 22.)

While Starr thought he may have taken the picture after the group touched down in Miami on Feb. 13, 1964, the photograph was taken days before, on Feb. 7, 1964, in New York, near John F. Kennedy International Airport.

"We went back up to the front [of the limousine line], waved to each one of them, and the last one was Ringo, he's the one who went, 'Roll down your window!'" Gary Van Deursen, who was driving the car (a borrowed Chevy Impala) told the "TODAY" show on Monday. The other passengers in the car included Suzanne Rayot, Arlene Norbe, Charlie Schwartz, Bob Toth and Matt Blender. (Blender, who is glimpsed in the back right of the photograph, passed away in 2011.) The six then-teenagers all attended Fair Lawn High School in New Jersey.


For his part, Starr is pleased that the reunion happened. "How great that they found these people! And how cool to now know a little of their story..."

Posted by Bob Vincent at 3:20 PM No comments:

RINGO WANTS YOU: Former Beatle Searches for Fans in 1964 Photo

If you were a Beatles fan living in Miami and chased down the Fab Four when they visited in February 1964, Ringo Starr wants to meet you.

Ringo wants to know if you are one of the fresh-faced kids, stuffed into a convertible, who pulled up next to the band’s car on the road, trying to get the attention of the popular band members.

From his car, Ringo snapped a photo of the teens — four boys and two girls; the sixth teen is barely visible in the back seat of the car.

For 49 years, the drummer and avid photographer has kept that snapshot and is including it among the 240 images in his new book, Photograph, released as an e-book earlier this year . A limited print edition will be published in November.

Ringo recently told USA Today he would like to meet those then-teens staring back at him...

"Give Peace a Chance" - FAB Cover and Video by TheBeatleSubmarine!

So John Lennon's birthday was yesterday. One of my favourite Beatle Co-op YouTube channels, TheBeatleSubmarine, have done it again; They've put their creative hearts together and produced yet another solid tribute to John Lennon. In past years they have set their tributes to the tunes of "Imagine" and "Watching The Wheels." This year they recorded their own cover of "Give Peace A Chance" and it blew my mind away!

This zealous group of teens and young adults are undeniable proof that The Beatles are still as fresh and relevant today as they were fifty years ago. While many of the Submariners are separated by hundreds of miles of land or sea, their love of John has helped narrow the divide and this video is a collaborative testament to the power of the Beatles' collective and individual legacies.

Turn up the volume on this one! Get ready to watch and re-watch this bright young group of Beatlemaniacs cover "Give Peace a Chance..."

Be sure to check out TheBeatleSubmarine's past tribute vids for John's 71st and 72nd birthday!
Posted by Bob Vincent at 1:10 AM No comments:

Email ThisBlogThis!Share to TwitterShare to FacebookShare to Pinterest
Labels: bagism, Bed-in, cover, Give Peace a Chance, happy birthday, john lennon, the beatles, The BeatleSubmarine, War Is Over, Yoko Ono

Posted by Bob Vincent at 8:29 PM No comments:

On Oct. 5, just four days before what would have been John Lennon's 73rd birthday, a Los Angeles Beatles tour guide made the shocking discovery that the John Lennon Walk of Fame star in Los Angeles had been damaged.

Gillian Lomax, who conducts Beatles-oriented tours in the Los Angeles area called A Magical History Tour, said she found the star had been damaged Saturday while she was conducting a tour. The Lennon star is one of the stops on her tour.

“It was totally obnoxious,” she said. “Who are these morons that would have defaced John Lennon's star?,” she posted on Facebook.

The star was covered with graffiti and drawings. The other three solo Beatles stars, which are all located nearby, on Vine Street at the historic Capitol Records Tower in downtown Los Angeles, were untouched...

George Feared Being Shot and Hated Being Bullied by Paul

From The Daily Mail

Barely a week into recording what would become The Beatles’ final album Let It Be, George Harrison was ready to quit.

He was no longer willing to fulfil a subservient role in the band, and by lunch on January 10, 1969, things came to a head. Having rowed with Paul McCartney over what to play, or rather what not to play, on the track Two Of Us – ‘Whatever it is that will please you, I’ll do it,’ said Harrison acidly – during a break he told his band mates he was leaving.

When? ‘Now. You can replace me. Put an ad in the New Musical Express and get a few people in. See you round the clubs.’

‘It was very uncomfortable,’ says Let It Be producer Glyn Johns. ‘To watch this begin and be there in the immediate aftermath was very unpleasant.’

Harrison and McCartney had had a fractious relationship since meeting at the Liverpool Institute.

The junior partner by eight months, George chafed at Paul’s domineering streak, and grew increasingly angry at being treated like a glorified session-man. Harrison’s friend and fellow guitarist Peter Frampton recalls being with Harrison in 1971.

‘I’d put on Paperback Writer and say, “I love the guitar on that,” and he’d say, “Oh, that’s Paul.” I put all these other Beatles tracks on: “Oh, that’s Paul.” It wasn’t until then I realised he had been stifled. It was very frustrating for George...’

A rare piece of music history will come up for grabs when John Lennon’s childhood home goes under the hammer later this month. The Beatles star lived at 9, Newcastle Road in Wavertree, Liverpool, from his birth on October 9, 1940, until 1942 and then again from 1943 to 1946.

After his parents’ marriage crumbled, Lennon had a troubled time, moving from home to home and from carer to carer—his maternal aunt, his father, his paternal uncle, his mother—before eventually settling with his maternal aunt at Mendips, in Liverpool’s busy Menlove Avenue, where he stayed until 1963. However, his mother moved back for a time into 9, Newcastle Road with her new partner and their first child, and Lennon repeatedly visited them there.

Since then, the red-brick terraced property, which is only a few streets away from Penny Lane, has changed hands only a few times. The structure of the house, with its three bedrooms and two sitting rooms, remains the same as when the Beatles singer lived there...

The song, which closed the finale of AMC's hit series "Breaking Bad" last night (Sept. 29), has suddenly risen into the top 25 on iTunes' top songs list and is poised for a return to the Billboard charts this week.

Industry sources suggest the song is set for a nearly 3,000% sales gain in the week ending Sept. 29. It sold nearly 5,000 downloads just last night. Remarkably, that one-day figure should immediately make the 1972 song earn its largest digital sales week ever. It has never sold more than 1,000 downloads in a single week, according to Nielsen SoundScan...

Although Beatles fans will most likely remember Lomax for recording a George Harrison-penned track called "Sour Milk Sea" in 1968, Lomax originally rose to prominence as a member of a Merseybeat group called the Undertakers in the early ’60s.

That band's success led to their quickly acquiring the services of Beatles manager Brian Epstein, which eventually led to a friendship with the Beatles and a recording contract with their label, Apple Records.

In 1969, Lomax released a highly regarded solo album, Is This What You Want?, on Apple. It was produced by Harrison and featured contributions by Harrison, Paul McCartney, Ringo Starr and Eric Clapton. However, despite its impressive guest list, the album didn't make it past No. 145 on the Billboard album chart.

Although Lomax never enjoyed commercial success, he continued to release R&B-influenced music, including 1971′s Home Is in My Head He remained musically active throughout the ’70s, ’80s, ’90s and beyond, doing time in several short-lived bands and resurfacing to record the occasional record...

Posted by Bob Vincent at 2:20 PM No comments:

Who Is your Favourite Beatle?